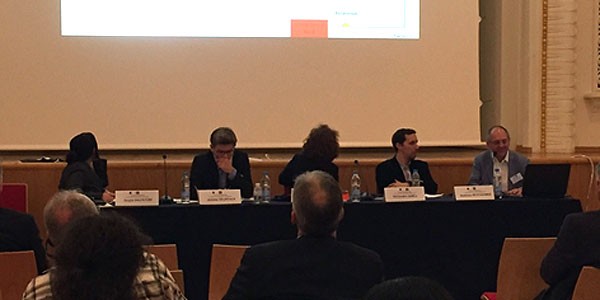 Between 22th-26th April, Professor Sergio Salvatore from ISBEM, the Euro Mediterranean Scientific and Biomedical Institute, member of ALDA, visited the Bulgarian partners of Re.Cri.Re project at the New Bulgarian University (NBU) to hold joint activities and showcase the key methodological pillars of the project.
***

Prof Sergio Salvatore was interviewed at the Bulgarian National Radio and participated as a speaker in a public lecture on â€œEuropean crisis and European Youthâ€ at NBU, as well as in the conference â€œCrisis, contestations, mobilisationsâ€. The latter, held at the French Institute of Sofia, focused on a reflection upon hot topics linked with the EU and Euroscepticism, regimes, parties and political elites, populism and radical , as well as citizen mobilisation and protest movements.
Similar phenomena often arise in crisis situations, as the one our continent is currently facing. Crises can be defined as the difficulties encountered by actors, institutions and established systems in facing change and the related political, economic and social consequences. In such cases, it is fundamental to understand the deep meaning of such shifts, in order for policies to be adapted to the new situations and therefore become more effective â€“ which is precisely the aim of Re.Cri.Re.
Re.Cri.Re is a three-year project funded under the call â€œEurope in a changing world – Inclusive, innovative and reflective societiesâ€ in the framework of EU Programme Horizon 2020. ALDA, in cooperation with a consortium of 15 universities across Europe, launched it in May 2015 with the objective to analyse the symbolic background of European societies and the impacts of the recent socio-economic crisis on them, in order to frame better policies at the local, national and European level.

Contribute to the success of the project by filling in and disseminating Re.Cri.Reâ€™s questionnaire on how people represent the space they live in and how these representations are linked to their way of thinking and feeling. The questionnaire is anonymous and only takes ten minutes to complete!

Questionnaire in all languages