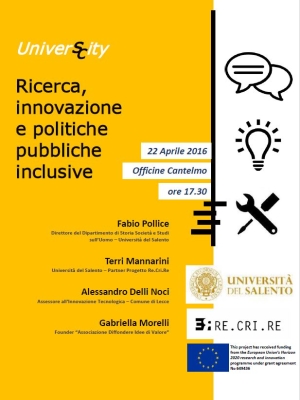 The RE.CRI.RE project was presented during a public event open to stakeholders and citizens. Prof. Terri Mannarini, partner of the project on behalf of the University of Salento, prof. Fabio Pollice, Director of the Department of History, Society and Human Studies of the University of Salento, dr. Alessandro Delli Noci, city Councillor for the municipality of Lecce and dr. Gabriella Morelli, Founder of the association â€œDiffondere idee di valoreâ€ (â€œIdeas worth spreadingâ€) engaged in a stimulating discussion about the interchange between academic research and public policies.

During the event, the research framework of RE.CRI.RE. project was described and preliminary results were illustrated, thereby stimulating a fruitful debate which addressed how social and psychological research can serve the purpose of planning effective public policies. A major attention was devoted to the topic of social innovation, on the basis that the changes occurred in contemporary societies demand for innovative responses to social and collective needs. The â€œLecce Social Innovation Cityâ€ project, promoted by the municipality of Lecce, was also showcased to the audit and some interesting links were established between the two projects. Reflecting upon the local cultures and the way people represent the world where they live in can provide useful hints to practice social innovation hence promoting community well-being.